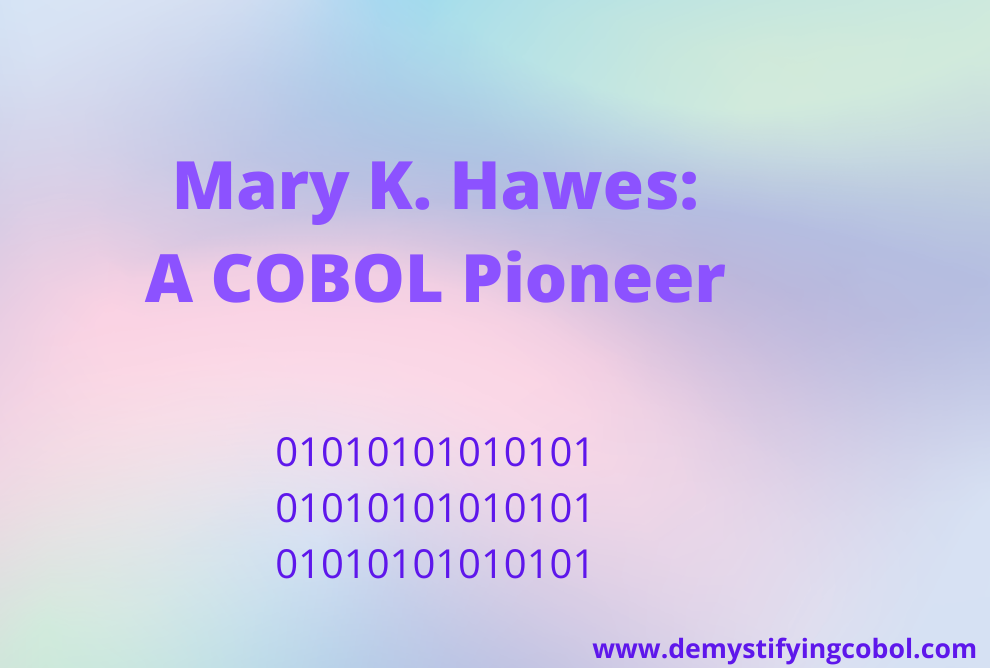 “A ship in port is safe, but that is not what ships are built for” is a version of this famous quote attributed to Grace Hopper, often referred to as the Mother of COBOL (Common Business Oriented Language). Even though she played a significant part in the history of computers for her many technical accomplishments, particularly for her role in the development of the COBOL Language, there were other women who were involved in COBOL’s history as well.

For example, Mary K Hawes is another key figure, who reportedly recognized the need for a Common Business Language in Accounting and initiated the process to develop the COBOL language. She is an often-forgotten woman in COBOL history who is overshadowed by the later significant contributions of Grace Hopper.

How the Idea Started

In March 1959, Mary Hawes was working as a senior product planning analyst for the Electro Data Division of Burroughs Corporation, a manufacturer of business equipment. According to information recorded in Proposing COBOL, the National Museum of American History, at that time, she called for “computer users and manufacturers to create a new computer language—one that could run on different brands of computers and perform accounting tasks such as payroll calculations, inventory control, and records of credits and debits.”

Per Jean Sammet’s book, History of Programming Languages (1981), Mary Hawes definitely made the first request that brought about an initial meeting in April 1959. This first meeting resulted in seeking sponsorship from the U.S. Department of Defense (DOD). Charles Philips, an employee at the DOD, agreed to the plan to start meetings in the Pentagon. In May 1959, approximately 40 representatives of computer users and computer manufacturers met and formed the Short-Range Committee of the Conference on Data Systems Languages (CODASYL). Further, according to the History of Programming Languages, Mary Hawes allegedly chaired the data descriptions subcommittee in the Short-Range Committee.

How it Became COBOL

During the later part of 1959 (per Proposing COBOL, the National Museum of American History) planning groups met in New York and Boston to prepare specifications for the new programming language they named COBOL. They modeled the new language on earlier computer languages for business: Remington Rand UNIVAC’s FLOW-MATIC, already in use; and IBM’s Commercial Translator, not yet implemented. FLOW-MATIC originated with a group led by Grace Hopper, who advocated for computer programs that could be easily read and understood. Commands in FLOW-MATIC and COBOL were written to resemble ordinary English.

In Sept 1959, Charles Philips gave the following positive comment: “The Department of Defense was pleased to undertake this project; in fact, we were embarrassed that the idea for such a common language had not had its origin by that time in Defense since we would benefit so greatly from the success of such a project” (Sammett, 1981)

In conclusion, Mary K. Hawes can be credited with the origin of COBOL. Not a small accolade, considering the language has persisted for over 60 years and is still widely in use today. 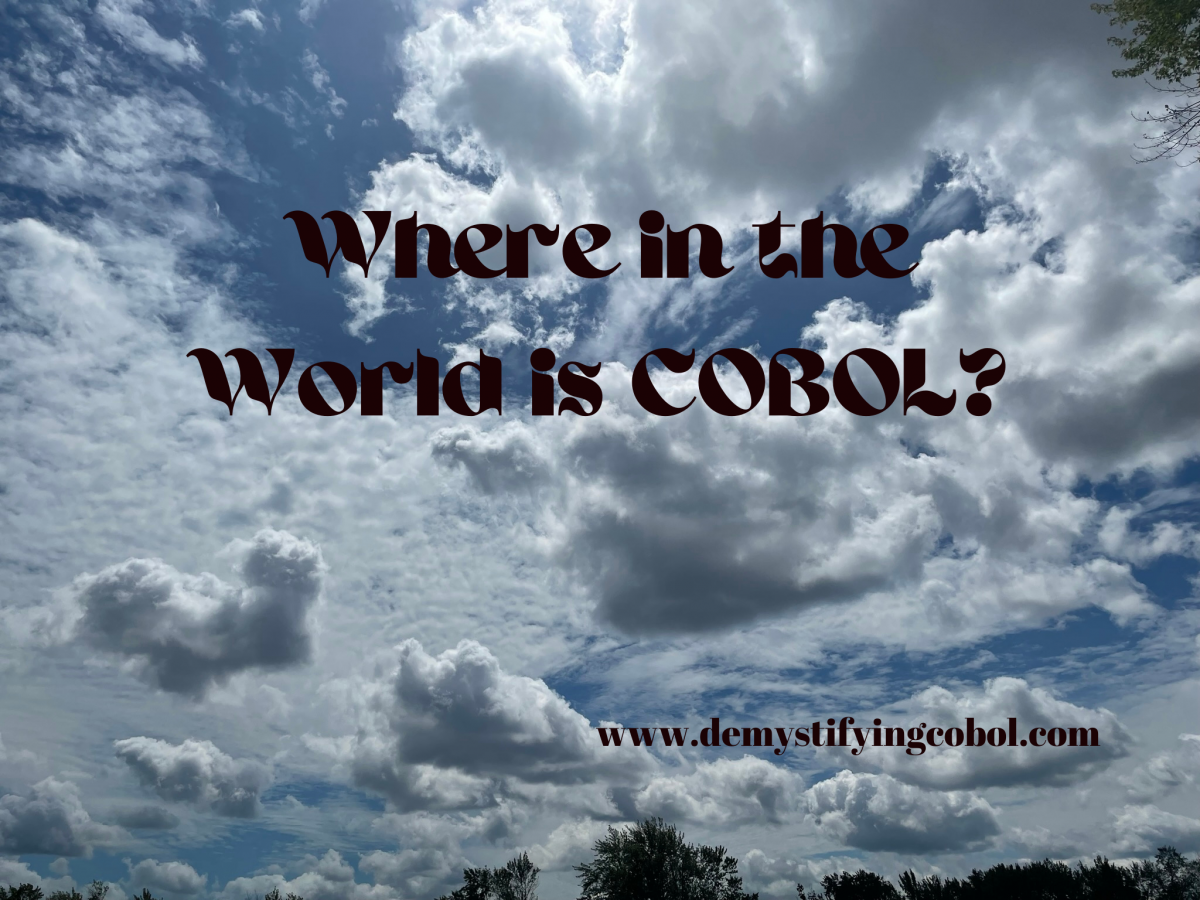 “Loving life is easy when you are abroad. Where no one knows you and you hold your life in your hands all alone, you are more master of yourself than at any other time” is a quote by Hannah Arendt, a famous political philosopher and Holocaust survivor. It is about the joy of moving to an unfamiliar country, out of your comfort zone.

In the process of demystifying COBOL, it’s good to recognize that the language is still in use in several different countries in the world.  COBOL is far from becoming obsolete, as was predicted 30, or even 40, years ago and can open up the possibility of travel for an experienced COBOL programmer.

In fact, Enlyft (2022) collected data on 28,906 companies that use COBOL. While they did find that the majority of these companies are in the United States and the United Kingdom, there is a COBOL presence in India, Canada, France, Brazil, Italy, Spain, Australia and Germany.

Finding a COBOL Job in Each Country

What if you’re a COBOL developer and you’re thinking about working in one of these countries, doing something that you’ve perhaps been doing for many years? I decided to do my own research on a potential answer to that question.  With a few simple LinkedIn (employment online service) searches for “COBOL Programmer” jobs in each country, I came up with the following results: 3,183 jobs in the United States; 188 jobs in the United Kingdom; 609 jobs in India; 241 jobs in Canada; 132 jobs in France; 582 jobs in Brazil; 23 jobs in Italy; 43 jobs in Spain; 68 jobs in Australia; and 100 jobs in Germany. There certainly seems to be no shortage of COBOL jobs available worldwide.

Getting a Job in a Foreign Country

To carry my research even further, Indeed (a worldwide employment website) has published an article, How to Get a Job in Another Country. It describes the following steps in the process: determine the type of job you want; decide what country you want to work in; find a job you’re interested in; apply for a visa or work permit; localize your resume and apply for the job. If you’re already a veteran COBOL programmer, it’s just a matter of picking your country of choice and following the process.

Amid all the talk of modernization and the negativity surrounding legacy COBOL systems, it’s easy to get stuck in a rut and feel like there is no future in a COBOL programming career. As you can see, with years of experience in COBOL, you could easily find available jobs in a foreign country where you may be interested in living and working. A move like that is not as out of reach as it may seem. If you have been leaning in that direction, I hope that this discussion has given you food for thought.