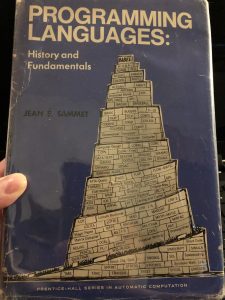 While researching my article, Jean E Sammet-One Woman Programmer’s Lifelong Success Story, I started thinking about buying a copy of Jean Sammet’s book, Programming Languages: History and Fundamentals. The more I thought about it, the more I wanted to own that piece of history. Somehow it is very attractive to me to be able to look back and see the history of the COBOL language as told by someone who was involved from the beginning. In spite of having worked with COBOL for almost 25 years, I haven’t thought much until recently about its origins and where it fits in. Even though Jean’s book is over 50 years old, I was able to easily find a used copy online.

A Piece of Programming History

Considering it was written by one person, I wasn’t prepared for the amount of detail the book contains in its 737 pages. There is a general discussion of 120 languages, along with sample programs that include the basic components of 30 languages. It was described on the book cover as a single source where “the reader can find basic information about all of the major and most of the minor higher level languages developed in the U.S.” All in all, it is an incredible snapshot of the world of programming in the year 1969. I’ve included a picture below of the sample COBOL program found in the book. 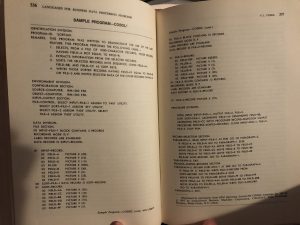 COBOL is found in a section titled “Languages for Business Data Processing Problems”. It is, of course, the major Business language described. I love the fact that Jean included a footnote in her “History of COBOL” indicating that she had inside information on how COBOL came into being because she was there from the beginning in 1959. This is the note in her own words:

“Since I was present not only at this initial meeting (representing Sylvania Electric Products), but also chairman of two different task groups of the Short Range Committee, the historical description of the early COBOL work is based on firsthand knowledge and participation, and is supported by appropriate documents (some of which I wrote at the time).”

The detailed history described in this book is only 10 years old at the time of writing, and it is interesting to see the stages in the early development of a major computer language during the late 1950s and early 1960s.

According to Jean’s description, there were initially supposed to be 3 committees involved: Short Range, Intermediate-Range, and Long Range. The Short-Range Committee included 6 competing computer manufacturers of the time: Burroughs, IBM, Minneapolis-Honeywell, RCA, Remington Rand Division, and Sylvania Electric Products. They were only supposed to identify what was wrong with existing business computers, but they ended up trying to develop a new language in a 3-month timeframe. They succeeded and created the first usable version of COBOL by the end of 1959.

That seems like a major accomplishment in such a short time, but Jean notes in her discussion that they did not have enough time to include everything that would be needed to do business data processing programming. As a result, during the 1960s, a Maintenance Committee, made up of users and manufacturers was organized and reorganized for the purpose of changing and improving the original version. The members of this committee came from several major organizations of the time: Bendix Computer Division, Control Data, DuPont, General Electric, National Cash Register, Philco, and U.S. Steel.

Imagine all the major companies getting together today to develop a programming language in just 3 months. It would probably never happen. In recent times, individuals in one company, as opposed to groups of companies, develop computer languages. A couple of examples are James Gosling, who worked at Sun Microsystems and founded Java and Guido Van Rossum, who worked at Google and invented Python. An interesting observation that Jean mentioned in her book was that she had never known a group of competitors to work together to develop a language that they could all use for the overall benefit of the customers.

The fact that COBOL is still widely used, over 60 years later, by large organizations such as insurance companies, banks and government is a tribute to the strong beginning that started with a committee of rivals working together for a common good. Maybe this is the type of collaboration that is needed to develop a language to replace COBOL, and that is why a suitable alternative was never developed.

We can only guess what may become the common business language 50 or 60 years from now. Will it be as durable and longlasting as COBOL? Only time will tell.

In the modern information age, most of us take the terms “computer bug” and “debugging” for granted. In fact, computer literate people probably can’t remember a time when an alternate meaning for “bug” wasn’t an “error in a software program or hardware system”. There is, in fact, an interesting story behind the adoption of the bug reference.

The tale begins with Rear Admiral Grace Brewster Murray Hopper. Born in 1906, Admiral Hopper was a gifted mathematician. She was one of the first programmers of the Harvard, Mark I computer. One of her other claims to fame is that she was responsible for the development of the COBOL (Common Business Oriented Language) computer programming language. COBOL is still widely used today in software programs that power banks, insurance companies, and governments. In 1952, she also invented a compiler that converted instructions written in the English language into computer code. This YouTube video from Biography is a summary of Grace Hopper’s accomplishments as a computer scientist and military leader.