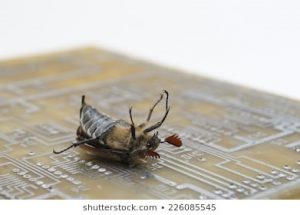 In the modern information age, most of us take the terms “computer bug” and “debugging” for granted. Most computer literate people probably can’t remember a time when an alternate meaning for “bug” wasn’t an “error in a software program or hardware system”. There is, in fact, an interesting story behind the adoption of the bug reference.

The tale begins with Rear Admiral Grace Brewster Murray Hopper. Born in 1906, Admiral Hopper was a gifted mathematician. She was one of the first programmers of the Harvard, Mark I computer. One of her other claims to fame is that she was responsible for the development of the COBOL (Common Business Oriented Language) computer programming language. COBOL is still widely used today in software programs that power banks, insurance companies, and governments. In 1952, she also invented a compiler that converted instructions written in the English language into computer code.

This YouTube video from Biography is a summary of Grace Hopper’s accomplishments as a computer scientist and military leader.

5 thoughts on “The First Computer Bug Ever — Literally”